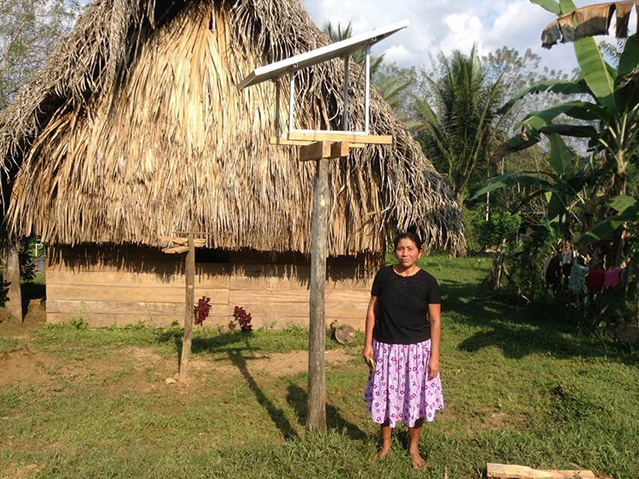 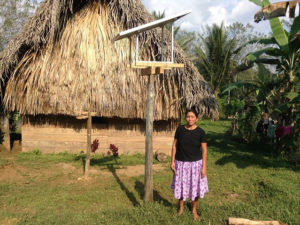 So last year, I remember receiving a phone call, tipping me about an extraordinary lady from Santa Theresa, a small Mayan village deep inside rural Toledo, who is going to India to study solar installation.  However, she was facing challenges in getting out of her village due to the floods and time was of the essence to arrive in time for the class or else she would miss a spectacular opportunity.

Fast forward a year later… last week I got a call from Plenty, an organization here in town that works in helping to develop the rural areas of Toledo.  PGtv was being invited to the lighting of Santa Theresa Village.  I asked, “How is that possible?! There are no electric lines that run to or through the village.”   She replied that the village is now under solar power, thanks to the efforts of a lady who traveled to India.    I saw the news piece showcasing her story on PGtv evening news and was just fascinated so I decided that I had to go meet this amazing woman.  We ventured out to Santa Theresa on an early Sunday morning to meet Florentina.  We caught her on her way to church and asked to hear her incredible story, which she eagerly shared with us.

Well meet Florentina…she is a 44-year old single mother of three boys and lives in the remote village of Santa Theresa.  Last year, a lady by the name of Megan showed up with the organization Plenty in her village and after some consultation with the village Alcalde (chief) and other residents, they selected two women from the village to go to India to learn about solar energy and lighting.  Now, Florentina had never been out of the country before, doesn’t own a passport, and had not gone beyond standard 6th or 8th grade.  None of that fazed her; she wanted to go and learn about solar energy.  With the help of Plenty, she obtained the necessary papers and documents and before long, she had a passport in hand and an airplane ticket to India.  However, she started to get cold feet when the other person backed out of going on the trip.

Florentina consulted with her youngest son on what to do.  Like every mother, she worried about her children.  She did not wish to leave them by themselves; who would cook food, wash clothes and look after them?  Her son reassured her and said, “Go to India.  This is your time.  We will be ok.”  Comforted by his confidence and encouragement, Florentina decided to leave for India the next day.  The next morning, when it came time to start her journey, the floods came and there were no transportation out of the village.  Not to be stopped by the flood waters, her son chartered a motorcycle to take her to the next village.  But this village was flooded as well yet Florentina crossed the flood waters in a dugout, then hopped on a truck to PG town, caught a James Bus to meet up with Mark from Plenty, who then drove her to the international airport.

This was her first time on a plane.  She first flew to Cancun on a small Tropic Cessna plane.  Next, she recalled, “I got on a big plane, one with lots of people on it and flew to Mexico City and waited there for a few hours and on to another big plane.”  Her eyes got brighter and brighter as she shared her story.  “Next stop was Frankfurt.  From Frankfurt, there was yet another plane.  Next thing you know, I was in India.”

She was told that she would be met at the airport by someone from Plenty but no one greeted her as she disembarked the plane.  She asked for Megan’s name to be announced over the loudspeakers and before you know it, Megan was being loudly paged throughout the Delhi airport.  Soon afterwards, Megan appeared and Florentina was so ecstatic that she hugged Megan as though she were a long-lost friend.  From there, they made an eight-hour drive to their lodgings.  By the next day, she was enrolled in a solar class at Barefoot University.  There, she met other women from all over the world and together, they participated in the five-month long class of harnessing solar energy.

As part of the arrangement for attending the class, the UN funding agency provided solar panels and kits for her village.  Soon after she arrived back home, these materials were delivered to the village.  One by one, she assembled and installed the solar panel kits.  Today for the first time in the history of the village, 99% of the households now have lights!  Kids can study and have better learning conditions in doing their homework.  Households can have fans to help stay cool in the tropical heat. No more kerosene lanterns and candles in the homes, which were fire hazards especially around young children. Florentina is so grateful for this phenomenal opportunity and is excited to see the impact it has on her village.  “Now that everyone has lights, I want to have workshops to show people how to maintain and repair them if needed because I have this knowledge and I can do that.”  She expects to hold her first workshop soon in the coming weeks.  Like the solar panels that have lit up her village, Florentina is a shining example of how a little bit of courage, a penchant for learning, along with a sense of adventure have made a monumental impact for her village.

Back to the Café
Meet More People